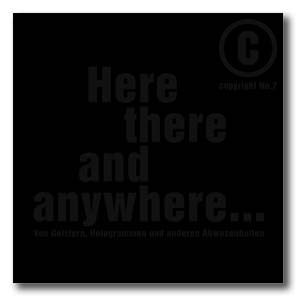 Concept
“Absence” is the Leitmotiv of copyright’s current research and exhibition project. This project takes an artistic stance in the interdisciplinary exploration of the theme with the copyright projektbüro playing the role of moderator and coordinator. Artists and academics alike are invited to join the tour and contribute their personal insights to the final presentation, which will take a multi-modular form:
It starts with a series of four exhibitions on the 29th February 2008 (until the end of June). In September another group exhibition is planned as well as a two day symposium that will take place for the 6th and 7th September 2008 at “Akademie der Künste” in Berlin.
The publication of the 7th issue of the copyright magazine with a documentation of the exhibitions and the symposium as well as contributions specially made for the magazine, will be presented in October.
This project is a not for profit project. Attendance of both exhibitions and symposium are free of charge.

Context and Aims of “The Absence Project”
The world of today can be perceived as hyper-complex, fragile and at risk yet one may find oneself overwhelmed and nauseated by increasingly repetitive, standardized as well as highly selective images and news. With the absence project copyright intends to create a (by nature) artificial intermediary space – a space in-between – that allows for processes of reduction, condensation, concentration and insight.
Investigating absence becomes the catalyst for a free play of illuminations and paradoxes, the shifting movement between absence and presence, visibility and invisibility, a play of magic and illusion, expectations and disillusionment.

Three main fields of investigation can be outlined:

•  Disappearance and Reemergence of Worlds
One of the fundamental undercurrents in dealing with questions of absence is dealing with the concept of one’s own existence or non-existence. This train of thought is always linked to the perception of what surrounds us for all self-realization is based on the perception of Other and of others. In escaping one’s self and escaping what is world, in the fear of loss(es), various strategies of repression, in all these the odd pair of absence and presence is reflected. Taking the writings of Peter Sloterdijk and Paul Virilio as point of departure this subject area can be seen as a domain to reflect on Welt and Weltlosigkeit regarding the construction of meaning, perception and identity.

•  The Reproducible Image and Absence (Medium and Narration)
Another core issue in contemplating the temporal, the ephemeral and the fleeting will be the medium of photography, this odd process and praxis that aims to capture the elusive, to make visible the invisible and in its seemingly objective demeanor calls out for the subjective. In celebrating the perfect moment it kills of momentarity, in re-presenting the past it solidifies what has gone, yet it also by restraining the eloping moment lays open the gap between fiction and reality, image and its other, absence and presence.

•  The Realm of the Fantastic
Phantoms, phenomena and fantasy make their appearance here, highlighting thus the interplay of appearing and disappearing. It is the shadows here that take over and guide the viewer through what remains in-between.

The objective thus is to explore the potentiality that is associated with the concept of absence and to search for passages, questions, approaches, forms of resistance whereby the three areas outlined above will interweave and complement each other.